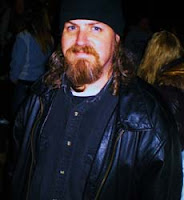 I've had the privilege to publish Alec Cizak twice before with "Diseases from Loving" in 2009 and "The Gimme" the following year. Mr. Cizak is a no bullshit kind of writer who counts Jim Thompson and Chester Himes among his literary heroes. He's learned his lessons well from these masters and his stories uncompromisingly explore the underbelly of our society. Mr. Cizak has also created one of my favorite webzines, All Due Respect, which won Spinetingler's Best Short Story on the Web for 2010.

Alec Cizak returns to BEAT to a PULP with "Katy Too."

Next: Paul D. Brazill (with Yours Truly) is "LoVINg the Alien."