Say It Ain't So, Clark 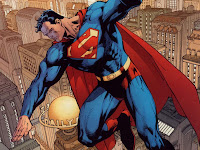 Leah, Maybe he will head to Canada.

Part of me feels that Action Comics is no place for counter-culture sentiments (and never mind anyone who tries to claim this story line is otherwise). On the other hand, kids have been priced out of the comic book market for some time, so I guess it makes sense for a four (is it five now?) dollar comic book to tackle world politics.

It seems contrived to me. A few years ago they killed Superman off when his sales were down. They brought him back and now he is tired of being an American. Silliness.

I love this. Its the most powerful moment I've seen since the death of Captain America several years ago. This is why we have heroes, and why they're still relevant. Thanks Clark.

I've been over Suparman for a long time.

Alex, Comics and graphic novels (of the last twenty years) have had some of the great moments in literature.

I've never really been a fan myself, Charles. It was always Batman or Hulk.

Captain America renounced his name during the Watergate scandal to become "Nomad" for a while. A concept that was silly then, and it's even more silly now.

It certainly garners quite a bit of attention in the here and now. But most of the time looks silly in retrospect.

Well, he was created by a Canuck, so maybe he should come home ;)

The irony of this timing is that I'm in a major Superman moment these weeks. I'm a Batman guy myself, but I read Grant Morrison's All-Star Superman and boy did it ever whet my appetite for Supes. I'm reading a novel (It's Superman) that I'll review this Wednesday.

As to this current kerfuffle, I'm going to go old-school and say that Supes is an American icon and he just needs to deal with that. I like updating long-standing characters. I'm not sure I like this one.

Reb, Ha! That makes sense to me.

Scott, It just seems forced this time around, doesn't it?

I bought and read Action #900 over the weekend. This section is after the main storyline, almost like an appendix of sorts. It's one of about 4-5 'short stories' and not even the best. That goes to a story about Jor-el and Lois getting SuperMAN to invite his Legion of Super Heroes buddies for pizza night (really; charming really).

Another thing about the actual citizenship story: the end panels has Supes flying away after standing in the plaza of Tehran (I think) for a day. As he flies away, leaving only the protesters and the soldiers, one protester gives one soldier a flower. The one soldier lowers his weapon. It's almost as if the author is saying Iran 2011 equals USA 1970. It's really ironic that everyone's so up in arms over this one, potentially uncanonical story that, in the end, symbolizes American ideals anyway.

Scott, I'm playing devil's advocate: would they have published this on VE Day in 1945?

Of course not. But the modern Lois Lane also would not be published in 1945 either. Nor would they have published the version of Superman circa the 1986 reboot in 1945 either. As I've (just) written in my review of the novel It's Superman (my blog tomorrow), Superman has adapted to the changing times. The world is a smaller place in 2011. That's doesn't necessarily mean they need to make Supes a non-American, but you have to admit that only a writer in 2011 would have thought of it.

Do you remember the last Superman movie where Daily Planet editor Perry White says, "Truth, justice and ... all of that stuff." That rubbed folks the wrong way and for the same reasons this current story thread does as well. It is fine that Superman matures with the times (race issues, feminism etc) but his true blue roots to the good old USA should not waver. Well, it can because the writers have that right but I won't be buying.

I think Batman took a similar wrong turn in the incredibly popular THE DARK KNIGHT. That was all crap at the end where we Americans need a bad guy and he will play that part.

And yes only a writer in 2011 would have thought of it. But why? What group does it feed into? Loons on the fringes? I find both mainstream Dems and Repubs very patriotic. Look at all the excitement (though I don't agree with dancing in the street) over the death of Osama from both sides? And in the same week one of our greatest American heroes renounces his citizenship.