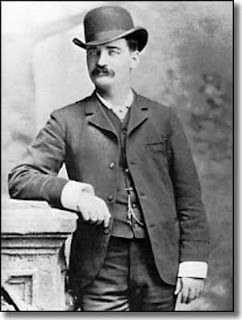 "New York is the biggest boobtown there is. They will buy any damned thing here."

"It was as a hunter he won his name of 'Bat', which descended to him, as it were, from Baptiste Brown, or 'Old Bat', whose fame as a mighty nimrod was flung all across, from the Missouri River to the Spanish Peaks, and filled with admiration that generation of plainsmen which immediately preceded Masterson upon the Western stage." (Bat, writing in third person, explains his nickname in his book Gunfighters of the Western Frontier, (1907).

"At the earnest request of many citizens of Ford county, I have consented to run for the office of sheriff, at the coming election in this county. While earnestly soliciting the sufferages of the people, I have no pledges to make, as pledges are usually considered, before election, to be mere clap-trap. I desire to say to the voting public that I am no politician and shall make no combinations that would be likely to, in anywise, hamper me in the discharge of the duties of the office, and, should I be elected, will put forth my best efforts to so discharge the duties of the office that those voting for me shall have no occasion to regret having done so. Respectfully, 'W. B. MASTERSON.'" (Dodge City Times, 1877)

"Every dog, we are told, has his day, unless there are more dogs than days."

"I arrived here yesterday and was met at the train by a delegation of friends who escorted me without molestation to the business house of Harris & Short. I think the inflammatory reports published about Dodge City and its inhabitants have been greatly exaggerated and if at any time they did 'don the war paint,' it was completely washed off before I reached here. I never met a more gracious lot of people in my life. They all seemed favorably disposed, and hailed the return of Short and his friends with exultant joy. I have been unable as yet to find a single individual who participated with the crowd that forced him to leave here at first. I have conversed with a great many and they are unanimous in their expression of love for Short, both as a man and a good citizen. They say that he is gentlemanly, courteous and unostentatious - 'in fact a perfect ladies' man.' Wyatt Earp, Charley Bassett, McClain and others too numerous to mention are among the late arrivals, and are making the 'Long Branch' saloon their headquarters. All the gambling is closed in obedience to a proclamation issued by the mayor, but how long it will remain so I am unable to say at present. Not long I hope. The closing of this legitimate calling has caused a general depression in business of every description, and I am under the impression that the more liberal and thinking class will prevail upon the mayor to rescind the proclamation in a day or two." (Letter from Bat to the Daily Kansas State Journal, June 9, 1883)

"There are those who argue that everything breaks even in this old dump of a world of ours. I suppose these ginks who argue that way hold that because the rich man gets ice in the summer and the poor man gets it in the winter things are breaking even for both. Maybe so, but I'll swear I can't see it that way." (This last quotation was also Masterson's last words; it was a bit for a column found on his typewriter. He died while typing.)

My Friend Wyatt Earp by By W.R. Masterson