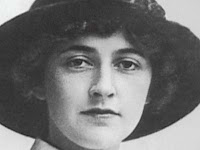 Agatha Mary Clarissa, Lady Mallowan, DBE (née Miller; 15 September 1890 – 12 January 1976), commonly known as Agatha Christie, was an English crime writer of novels, short stories and plays. She also wrote romances under the name Mary Westmacott, but is best remembered for her 80 detective novels and her successful West End theatre plays. Her works, particularly featuring detectives Hercule Poirot or Miss Jane Marple, have given her the title the 'Queen of Crime' and made her one of the most important and innovative writers in the development of the genre. Wikipedia

Crime is terribly revealing. Try and vary your methods as you will, your tastes, your habits, your attitude of mind, and your soul is revealed by your actions.

Curious things, habits. People themselves never knew they had them.

The best time to plan a book is while you're doing the dishes.

An archaeologist is the best husband a woman can have. The older she gets the more interested he is in her.

The popular idea that a child forgets easily is not an accurate one. Many people go right through life in the grip of an idea which has been impressed on them in very tender years.

Most successes are unhappy. That's why they are successes - they have to reassure themselves about themselves by achieving something that the world will notice.


Very few of us are what we seem.

I've always believed in writing without a collaborator, because where two people are writing the same book, each believes he gets all the worry and only half the royalties.

I specialize in murders of quiet, domestic interest.

One doesn't recognize the really important moments in one's life until it's too late.

I live now on borrowed time, waiting in the anteroom for the summons that will inevitably come. And then - I go on to the next thing, whatever it is. One doesn't, luckily, have to bother about that.

Extract from an unpublished Agatha Christie story, The Capture of Cerberus

Christie's Mystery
Posted by David Cranmer at 1:01 PM
Email ThisBlogThis!Share to TwitterShare to FacebookShare to Pinterest

You know, I've actually never read an Agatha Christie novel before. I'm ashamed to admit it... Any suggestions?

Cullen, I would start with And Then There Were None (1939) but there's very few misfires in her catalog and you can start anywhere.

Cloudia, And Buenas Noches to you.

I've never been a fan of Marple or Poirot (except for Peter Ustinov in the Evil Under the Sun movie), but I'm currently really enjoying The Seven Dials Mystery. It features "Bundle" Brent, an "it girl" of the '20s, and skewers the "upper-class twit" with a great deal of bold humor, something I was not expecting.

Thanks Dave, those are the best Christie quotes I've seen in awhile.

BTW, saw "Orient Express" when I was about eleven and it gave me nightmares for months.

Craig, The Seven Dials Mystery was the first Christie novel I read as a teenager. All I remember was the interesting (tell me if I'm wrong)chapter one where all the suspects are talking about the protagonist and then the second chapter where it begins with him in bed discussing these guests and going downstairs to greet them. Oddly, I remember little that follows but know I liked it.

Cormac, Orient Express was such a terrific film with just a freaking unbelievable cast. I haven't seen it in years and it's high time time I check it out again.

"Very few of us are what we seem."
I love that quote. You can never go by appearances. There are people I know, normal-looking people, who have committed unspeakable crimes.

Unusual to see a photo of the young Agatha Christie but refreshing for a change. Appointment with Death comes to mind when I consider the many books by Dame Christie I've read. Poirot was such an ass but enjoyable nonetheless.

I had an aunt who had the whole Christi catalog but I was already in grad school when I discovered teh fact and ended up only reading one. If I'd known earlier I would have borrowed them all no doubt.

Brilliant, incisive quotes, but this: "One doesn't recognize the really important moments in one's life until it's too late" is a painful truth.

JR, Certainly true. Jeffrey Macdonald and Tim McVeigh are two examples of regular guys living next door that anyone would have trusted.

Don, I was always more of a fan of the non series characters. Though, if I had to choose, it would be Miss Marple over Poirot.

Lois, Yeah that’s a great quote. And she was quite a lady. I may have to read a biography on her to learn more.

Charles, Like I mentioned to Cullen I would recommend AND THEN for beginners. You would probably be hooked after that. Btw I am reading SWORDS OF TALERA and that writer has some serious writing chops.

Leah, That last quote about “waiting in the anteroom” got me. It’s true. Why worry about the inevitable.

Those quotes are pithy! Enjoyed reading them.

Terrific post - thanks. And I agree about And Then There Were None - probably the greatest of all Golden Age mysteries.
My other favourites include The ABC Murders and Peril at End House.

Lois sent me, when she mentioned seeing the quote:

As a native New Yorker, I say, "Thank you, Dame Agatha."

I know many look down on her, but I still say she's a lot of fun if you forgive her her class foibles. THE MURDER OF ROGER ACKROYD blew me away when I first read it.

Chris, Pithy? You must be watching the O’Reilly Factor.

Martin, I have The ABC MURDERS waiting to be read.

Terrie, New York is my country also. Unfortunately, I don’t see the lights of home as much as I wish.

Patti, I have not read THE MURDER OF ROGER ACKROYD but I know its reputation as being one of her best.

Odd that I read your Christie quote yesterday and what should I read this morning?

But Rachel often reminds me of her favorite line from a Coen Brothers film: Nobody knows anybody, not that well.

The video in your related links on Christie's vanishing act was riveting. I don't believe for a second she was out of it but instead wanted to torture her husband. What say you?

Love her or hate her, Christie is apparently the best-selling author ever, in any genre, of all time...so she must have been doing something right. I'm looking forward to the new stories...

It was reading Cullen's comment brought it home to me that I have never read an Agatha Christie either. I have only seen them performed. I shall have to put that right. Thanks for the post.

David-I don't see a forgotten book up so I am assuming you're not doing one today. I won't be around much but if I see one later I'll add it.

Cormac, Interesting how that works isn’t it? And Connelly is so damn good. The Concrete Blonde from the early nineties is a favorite.

Diane, I’m with you. Maybe she was a little stressed but she knew what she was doing and maybe the reason she never talked about it was because of embarrassment.

Rafe, Within the first few pages of a Christie novel, you sense a familiarity, that you’ve been reading these characters for years. And I’m not referring to her series characters but the standalone entries. Plus, she’s able to balance many characters effortlessly without ever losing the reader.

Dave, Most people who haven’t read a Christie novel have seen some of the movies and, like you mentioned, the plays. Still, I’m sure you would enjoy reading one.

Patti, Lo siento. But I will return next week.

I think her books may have been my first introduction to crime novels, if you don't count the Bobsey Twins and Nancy Drew I guess. I am pretty sure I can say that if I haven't read it, I have seen it performed in some fashion.

"Interesting how that works isn’t it? And Connelly is so damn good. The Concrete Blonde from the early nineties is a favorite."

"Chasing The Dime" was my first and while I thought it was predictable to a degree, and a little too close to the movie "Sneakers," I thought that he was a good writer. "The Concrete Blonde" was my second Connelly book and it let me know that he was for real.

P.S. With "The Scarecrow," he makes up for "Chasing The Dime" in terms of plot and reexploring the darkside of the Internet.

Reb, Like Conan Doyle she's a first for many mystery readers.

Cormac, You have convinced me The Scarecrow. I will be on the look for it.

I read most of her stories during my teenage years. Bright stories, I thought.

The quotes are so very Agatha Christie.

David, I was unable to load the videos you posted, so will check back later.

I meant to say 'brilliant' instead of 'bright.

Barbara, Thanks for pointing out the problem with the video. It has been removed from the YouTube source. Unfortunate, because it was a revealing piece on her famous disappearance.

I've never read any Agatha Christie, either . . . for some reason, the mystery genre has never appealed to me. I was so charmed by these quotes, though, that I want to give her writing a look!

(I do remember going to see The Mousetrap in London in 1982. It had already been running for decades!)

The mystery genre has never appealed to you! I just grabbed my heart and nearly passed out. Ha! Well, at least you've seen The Mousetrap. That's a good one.

Nice compilation about Agatha Christie Quotes. I have collected many quotes from you. Thanks for sharing!!