The Costs of the Transporter 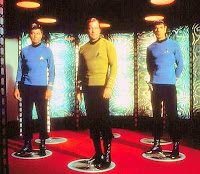 My charmer and I are currently apart due to work and we recently had a conversation about how easy (albeit not happy) we have it compared to, say, John and Abigail Adams. When John A. was the ambassador to France, he was away from home for several years at a time. They relied on letters to communicate and quite often the messages didn’t make it through. Hell, the trip on the high seas was risky enough. Our conversation fast-forwarded to the 23rd century and we pondered how nice it would be to beam-in for supper nightly. But how long would it be before we complained about how miserable it is to see each other for only a couple of hours? Then a more interesting question popped up. How much would it cost to take a transporter? Would it be a flat-rate deal to anywhere in the world or would a domestic transport be less expensive than going to another country (can you just imagine the customs nightmare with people beaming in every few seconds... I'd hate to get caught mid-stream if there was a back-up)? In any event, you can bet your cuddly Tribble that it’s not going to be free.
Posted by David Cranmer at 7:45 AM
Email ThisBlogThis!Share to TwitterShare to FacebookShare to Pinterest
Labels: random

When I was a kid watching that series, I truly believed I would see it happen in my lifetime. Now, not so sure.

In August 2008, physicist Michio Kaku predicted in Discovery Channel Magazine that a teleportation device similar to those in Star Trek will be invented within 100 years. -Wikipedia

100 years! Guess I'd better look into a little suspended animation.

It would still be cheaper than flying within Canada though! Not to mention it would be worth every penny not to have to be crammed into a plane with the unwashed masses ;) I'd take my tribble with me too.

If I owned the transporter I believe I'd charge a lot.

Reb, Ha! All very good points. I have a hell of a time flying coach and you're right that flying solo would be a huge improvement.

Charles, That person will be a wealthy bastard for sure.

There is always the possibility that a science lab somewhere has already come up with a working model and not provided the information to anyone, least of all the masses. The 'Stealth jet' was kept under wraps for years before it surfaced.

I remember individuals who first saw the Stealth flying over thought they had witnessed a UFO. Which they did... only American made.

I'm with Bones on this one that it's just not natural having your atoms scattered across the cosmos. Somehow I can't believe those Heisenberg Uncertainty Compensators would manage to avoid making a mistake with any flies in the transporter beam.

I've heard some chatter that the transporter scenario is first likely for teeny-tiny quantum-arena bits of information. That will be the first stuff to go here to there without an in-between.

I have close friends who are living apart due to work, and they're Skyping their way through with web cams. Not the same, but better than waiting months for a (possibly lost) transatlantic letter, for sure.

Funny- my security word is "payin" as in we'll be payin' a lot for a human-sized transporter.

Did anyone else wonder-- with all the technology-- why did Chekhov have to run from the bridge to the transporter deck? They couldn't give him virtual controls where he was already, like a PC tech taking over someone's work station? Why does the command crew have to Go to the physical location to work any of the switches on the ship?

I.J., I always enjoyed DeForest Kelly going off on the transporter especially in The Motion Picture but I gotta say I would be the first up for dematerialization. Btw thanks for stopping by and it reminds me I have a western short for Short Barrel Fiction. Just have to polish it up.

Clare, We have to have rules and regulations even in the future. Can you imagine someone sitting on the can and they decide to beam to another bano because they're in a hurry?! No sireee. Please, an orderly line to the Transporter chamber.

story premise: what if a minute fraction of your soul/humanity was shaved away into oblivion every time you transported, and those transported became more violent over time? or more insane? hmmm.

of course there's the who "brundle-fly" scenario....

I believe that was highlighted in an episode called The Enemy Within where an evil Kirk appeared and tried to rape Yeoman Rand... It does raise a good question to those who believe we have a soul-what happens.