I’m re-running an old post today to celebrate the 100th anniversary of Norbert Davis’s birthday. Looking back, I borrowed heavily for this post and have attempted to include all the links below. I’ve never considered myself a strong reviewer, so please check the links of those who are.

Norbert Davis is one of the great pulp writers whose name has fallen by the wayside, overshadowed by giants like Hammett and Chandler. But thanks to Otto Penzler's The Black Lizard Big Book Of Pulps, two great stories by Davis have been revived, The Price of a Dime and You'll Die Laughing, and received with great enthusiasm. 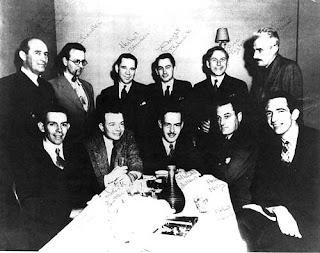 Penzler explains in the forward to Dime that Black Mask editor, Joseph T. Shaw, published only five stories by Davis because Shaw didn't appreciate Davis's Thurber-esque approach to hard boiled fiction. Yet, it’s the whimsy mixed with violence that gives Norbert Davis his signature style. A perfect example is in Sally’s in the Alley (1943) where the protagonist, detective Doan, gets into a tussle with a good-looking Hollywood actress, and her concerned agent calls out:

“Hit her in the stomach!”
“What?” said Doan, startled.
The shadow jiggled both fists in an agony of apprehension. “Not in the face! Don’t hit her face! Thirty-five hundred dollars a week!”

But Davis also proves he can keep up with Hammett and Chandler in stylistic cynicism. In Sally:

"The Mojave Desert at sunset looks remarkably like a painting of a sunset on the Mojave Desert which, when you come to think of it, is really quite surprising. Except that the real article doesn’t show such good color sense as the average painting does. Yellows and purples and reds and various other violent sub-units of the spectrum are splashed all over the sky, in a monumental exhibition of bad taste. They keep moving and blurring and changing around, like the color movies they show in insane asylums to keep the idiots quiet."

It’s this combination of gifted prose, hard boiled action, sprinkled with humor that has compelled me to read Davis. However it can be difficult to find his work. His major novels and the Max Latin anthology are available from Amazon and I have ordered some of them. Still, there are many short stories from Detective Tales, Black Mask, Phantom Detective, etc. that have yet to be compiled.

So what happened to Norbert Davis? Perhaps, success came a little too quickly and at an early age. Davis began selling stories while attending college at Stanford. During a writing class, an instructor criticized one of Norbert’s efforts to which Norbert stood up and countered, “Sir, this is a check for $200 from Argosy. The editor didn’t find much fault with my story.” But the professor derided Davis by saying they were there to learn ‘literary merit.’ When Davis finished college, he continued to pursue his writing. His stories quickly turned to gold and his potential seemed limitless. In the mid 1940s, he left the pulps and exclusively wrote for magazines like The Saturday Evening Post where he could make more money. But that success was short lived and the ‘slicks’ began rejecting his work. John D. MacDonald pointed out that even though Davis produced some exceptional writing, it was mixed with segments that were lackluster. He goes on to say Davis could have learned more if he had stuck longer with the pulps. [Rue Morgue Press]

From what I found online, there seems to be some confusion concerning his death, but it's known that Davis was going through several stressful events. He was grieving over his son who was stillborn, he was increasingly frustrated with his career and he had received a diagnosis of cancer. On July 28, 1949, Norbert Davis, the man who had brought humor to the world of hard boiled writing, committed suicide by carbon monoxide poisoning. He was only forty years old.

See also http://www.mysteryfile.com/NDavis/Wit.html
Posted by David Cranmer at 1:01 AM
Email ThisBlogThis!Share to TwitterShare to FacebookShare to Pinterest
Labels: author, pulp

Ha! But by magic the post says Saturday. Tomorrow no one will notice except for Kieran's comment.

Must be GMT - just turned Saturday in UK.
Interesting post though and about someone I had not heard of before.
Thanks David - now I'll have to go rumaging for a something by Mr Davis.

Thanks for running such a good profile of Norbert Davis. Way back in the fifties when you could buy old pulps for ten cents apiece I started reading his crime stuff. His easy going style always appealed to me as did his affection for screwball comedy. I remember reading one of his western shorts that had a bit of screwball in one scene. You list his Max Latin collection. The book is introduced by John D. MacDonald, a big Davis fan. It also gives JDM the opportunity to talk about his own pulp days.

Ray, THE MOUSE IN THE MOUNTAIN and SALLY'S IN THE ALLEY are tops. I've yet to read his other two major novels. The Max Latin anthology is also a must.

RReynolds, They probably just got paid.

Ed, The word effortless comes to mind when thinking of his style. I still chuckle at prose written sixty years ago and it's phenomenal the way he sprinkles humor into a hardboiled story . I would like to read more genres from him like the western you mentioned but they are difficult to track down.