"Fast is fine, but accuracy is everything." -- Wyatt Earp 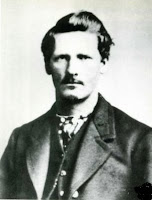 Wyatt Berry Stapp Earp (March 19, 1848–January 13, 1929) was an American farmer, teamster, sometime buffalo hunter, officer of the law in various Western frontier towns, gambler, saloon-keeper, miner and boxing referee. He is best known for his participation in the Gunfight at the O.K. Corral, along with Doc Holliday, and two of his brothers, Virgil Earp and Morgan Earp. He is also noted for the Earp Vendetta. Wyatt Earp has become an iconic figure in American folk history. He is the major subject of various movies, TV shows, biographies and works of fiction. [Source: Wikipedia]

G at Cedar's Mountain has an informative review of Inventing Wyatt Earp: His Life And Many Legends by Allen Barra.

Some historians have tried over the years to paint the Earps in a negative light but it never sticks. Here's the latest attempt.

How Wyatt Earp Got Buried in a Jewish Cemetery

For some interesting pictures, go to the Wyatt Earp Photo Page.
Posted by David Cranmer at 1:01 AM
Email ThisBlogThis!Share to TwitterShare to FacebookShare to Pinterest
Labels: quote, random

Died in 1929!
So fascinating!
Now back to find out why he's in a Jewish cemetary. hiding out?
Aloha, David

My favorite portrayal of Wyatt Earp is James Garner's take in 'Sunset.'

And I admit that when I was just a tot Hugh O'Brian made sure that Wyatt would always be a hero to me. Sing along, those of you who remember: "Wyatt Earp, Wyatt Earp / Brave, courageous and bold / Long live his name and long live his fame / And long may his story be told."

I admired Robert Parker's fictionalized insights into Wyatt Earp in his recent "Gunman's Rhapsody"... Compelling portrayal of a conflicted lawman. Hey, David, gave you and BTAP a fine plug in my upcoming interview over on Bookspot....

Thanks for the link, it's greatly appreciated.

I think the book covers this particular aspect as well.

they have been trying hard to paint him as a bad guy, think its true or what?

and thanks man, means alot.

"Fast is fine, but accuracy is everything." -- Wyatt Earp

Love the quote. It reminds me of writing historical fiction. Yes, it's great to pump out 10 pages in a day, but it's nothing if you get the facts wrong.

Cloudia, Back when I was knee-high to a grasshopper, I remember thinking '29 wasn't that long ago. He seemed contemporary.

Corey, O'Brian's Earp has been released on DVD and I for one have never seen the series. I am a big fan of other westerns of the era so it's on my list. I do like Gardner’s masterful portrayal but for me Kurt Russell is in the definitive version.

Kieran, thanks for the plug. I’ll be looking forward to your Bookspot interview. "Gunman's Rhapsody" along with the Cole/Hitch westerns have rejuvenated Parker’s writing.

G, It does cover it and since returning home, I’ve broken out this bio. Without a doubt you have nailed the review perfectly.

Josh, He had feet of clay, but, nine times out of ten, he was upholding the law under difficult circumstances. The Vendetta Ride being the exception, he was a damn fine lawman.

D.A., Funny you should mention the analogy. I was applying it to short story writers like myself who pump out yarns sometimes a little to fast.

I've seen some of the historical revisionism that tries to make Earp a villain. I'm not buying it. I doubt he was a saint but he was more on the side of the good guys than the bad.

I think Earp was less bad than some of those he had dealings with but he was certainly not a good guy in the sense that he always oprated on the right side of the law. Course in the famous gunfight the man the Earp's claimed fired first may not have even been armed - least there's never been any proof that he was armed. This was the chief point of the prosecution case against Earp and co.

Earp was of his time and I think by the standards of those days he would be considered one of the good guys. Whatever the truth he remains a solid American icon.

Archavist, Good points for sure. These western icons remind me of the quote from HUD where Paul Newman states, "Why you separate the saints from the sinners, you're lucky to wind up with Abraham Lincoln."